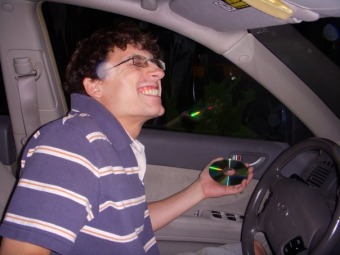 Tom (born 10/01/1984) learned to love life at a very young age. He grew up on the Main Line of the Philadelphia suburbs, playing little league baseball and hugging the spotlight on his local high school cable TV broadcast. He threw a dart that landed on Susquehanna University, where he studied broadcasting, writing and philosophy, and filled the late-night airwaves with the glorious sounds of the Grateful Dead every week with his radio program, Sunday Night Dead. Since then, he's written for a travel publication called Where Magazine, and worked as a public relations associate for PUNCH Media in Philadelphia. You'll also find him running around and waiting tables at the Great American Pub in Conshohocken, Pa., his current hometown.

Tom’s travels have been notably limited, as he’ll be happy to tell you. The highlights include a week in Tampa, another in Montreal, a third in Traverse City, Mi., and a swath of long, usually pointless drives up through New England. Most of his childhood vacations smelled like fish.

Tom is an endlessly passionate person – whether you’re talking music, food, politics or you name it – he’s got something to interject, and is probably waiting for his chance to do just that. A born communicator and enthusiastic writer (with the bylines to prove it), he’ll be documenting every step of the trip with fearless candor and unmatched wit. In the meanwhile, Tom will be sitting online, building an itinerary of the best destinations and attractions in the country. 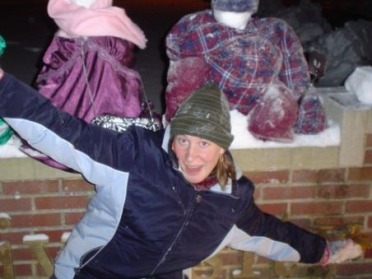 Sarah (born 11/11/1984) is a lover of fun and seeker of thrills, born and raised in South Hadley, Ma. Sarah met Joey and Tom at Susquehanna University as she toiled her way toward a degree in English and Creative Writing. After a few brief stints as a waitress and a bank teller, she scored a job working at Merrill Lynch, making more than Joey does even though he’s been there almost a year.

Sarah spent plenty of time during her younger years on the road and (ultimately) the beach, in places California, Nantucket, Martha’s Vineyard and Hawaii (where her mother grew up). She enjoyed a foray of travels around Europe, including a week in Scotland, ten days in London and a semester abroad in Ireland. Her most recent voyage was in January of 2007, when she and Joey raced across the country and back in under two weeks.

During our road trip, Sarah will be relied upon heavily for her coolheadedness, her rationality, and her fantastic culinary skills. A lover of blues and jazz, and a born sightseer, she’ll be behind many of our cultural explorations as we travel the land. The perfect wedge between Joey and Tom’s ever-converging egos, Sarah will keep us smiling and, most importantly, sane. 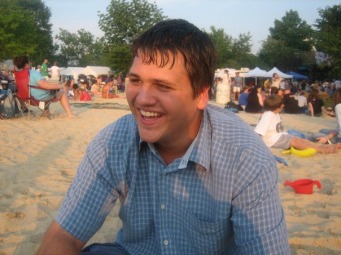 Joey (born 11/28/1984) is the product of a very large, very close family from a depressingly quiet town in Pa. called Williamsport. He was randomly matched with Tom as freshman year roommates in college, based on their mutual tastes in music, entertainment and general cleanliness. He spent his time at Susquehanna University studying finance and goofing off with his fraternity, Phi Sigma Kappa. A Merrill Lynch man, he currently lives together with Sarah in Bensalem, Pa.

Joey’s travel experiences included a semester abroad to London during college, which allowed him to explore the nearby lands of Ireland, Scotland, Spain, France, Italy and the Netherlands, among others. His father Joe Sr. taught him the art of diving and brought him to some of the most beautiful islands in North America, as far away as Belize.

Joey found Sarah living next door to him during senior year of college, and quickly latched on like a barnacle to a hull. Within months, the two of them had piled into Joey’s Xterra for a cross-country trek that covered over 7,500 miles, from New York to San Francisco (with a victory lap down Highway 1) and frantically back to central Pa. with only hours to spare before the start of spring semester classes.

Joey’s sense of adventure knows absolutely no bounds. He’ll eat anything you put in front of him, drive down the most rugged dirt roads he finds and rip on you to no end if you don’t do the same. His sense of financial responsibility will be excruciatingly important for us on our journey, but so will his constant need to have his way. Besides, all he ever wants to do is have a really good time.