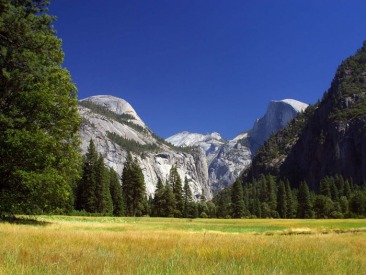 The majority of Yosemite National Park is designated as a wilderness area, which means that there are very few manmade amenities to the land, and nature’s true wonder stretches as far as the eye can see. While we are here we will see everything from impressive rock formations and gorgeous meadows to giant sequoias and beautiful lakes that reflect the views around them. Yosemite is best known for its waterfalls which are fed primarily by snowmelt, but unfortunately for us these waterfalls run out of steam towards the end of summer only to reawaken once the snow falls again in the early days of winter. The weather may impress us if the waterfalls don’t, as spectacular thunderstorms can explode across the skies at the drop of a hat. 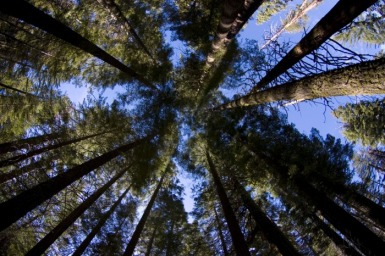 One of the most impressive things to me as I read about Yosemite was the ancient sequoias. These massive trees have actually adapted over the years and now their bark is fire resistant. These giant wonders withstand forest fires that clear out brush on the forest floor below and make way for seeds the sequoias drop there. The Mariposa Grove of Giant Sequoias near the South Entrance is the largest grouping of these trees with about 500 in the grove.
Yosemite, like other national parks, is known for its vast and expansive views where nature dwarfs humanity and blue skies make mountain sides stand out in impressive distinction against the clouds. We will want to backpack around in Yosemite Valley to get a glimpse of some of these rock formations such as Half Dome which is Yosemite’s most recognized symbol, Glacier Point which provides an impressive view of the valley, Hetch Hetchy which is known as Yosemite Valley’s twin, and El Capitan which is the largest monolith of granite in the world. 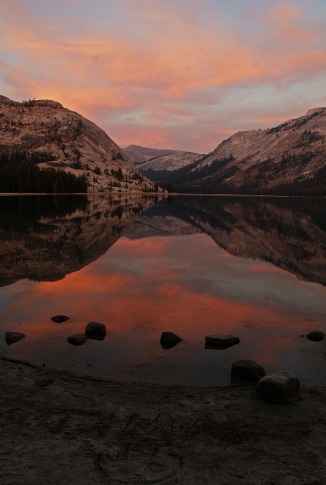 The best view points in the park include Tunnel View, where the most famous views of Yosemite Valley and Half Dome can be seen; Olmsted Point which shows a different angle of the same view; El Capitan Meadow which reveals great views of both El Capitan and Cathedral Rocks; Pothole Dome and Lembert Dome along the west end of Tuolumne Meadows and the Tioga Road, and much more.
We may also want to run around in the meadows or sit by lakes to enjoy the views. Some of the parks most popular meadows are Cook’s Meadow, Sentinel Meadow, Stoneman Meadow and Leidig Meadow, where we might see bears, deer or other smaller woodland critters scurrying about. The lakes we will want to see are Tenaya Lake (shown here) and Mirror Lake, which reflect the mountains and forests that surround them.
If we wanted to we could spend part of a day driving a 39-mile scenic road between Crane Flat and Tuolumne Meadows which is called Tioga Road and is surrounded by majestic peaks and domes. But no matter what we do, Yosemite will be an amazing escape from cities and highways and will provide us with a few days of relaxation and surround us with stunning beauty.