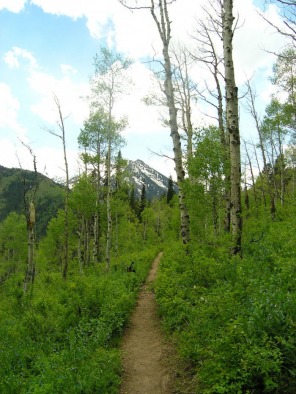 The Ute Native American word Wasatch means a low pass over a high range, or mountain pass, and the French word Cache means to hide. These words were originally used in reference to fur trappers who were the first Europeans to visit the area. We will arrive in this neck of the woods at the beginning of the weekend, so we may see several hikers, swimmers and general fun lovers out and about as eighty-five percent of Utah’s population lives within fifteen miles of the mountain range.
The forest is located on the western edge of the greater Rocky Mountains and on the eastern edge of the Great Basin region. The Wasatch Mountain Range extends into Idaho. There are several scenic byways we can drive along, and lots of lovely sounding hikes we could take to really enjoy the rock formations and wilderness in this part of Utah. 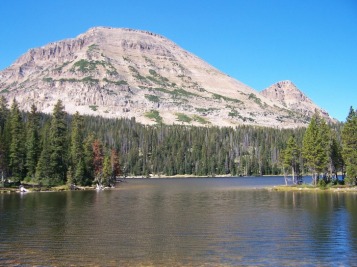 We may decide to drive along the Mirror Lake Scenic Byway where we will drive up Bald Mountain Pass at an elevation of 10,687- feet and look out over the Uinta Mountains which are America’s only major East to West running mountain range and which have some of the highest peaks in Utah. If we continue on this path we’ll dip down to Mirror Lake (at right) which is described as a beautiful body of water that allows passers-by to see more than just the water, but the landscape surrounding it as it reflects off the still pool. We’ll be parallel with Provo River if we take this scenic byway, so we’ll come to Upper Provo River Falls, which are beautiful, terraced cascades of water running down the mountainside. 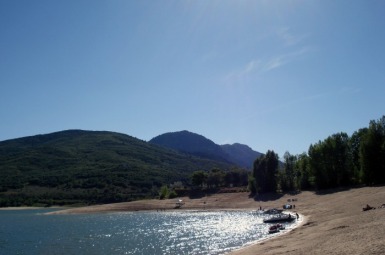 We have our pick of scenic byways though, so we may want to take a ride along Ogden River Scenic Byway or Big or Little Cottonwood Canyons Scenic Byways.
On the Ogden River Scenic Byway we would come across the Ogden Canyon and we would pass by the Pineview Reservoir (at left) six miles after the canyon.
If, however, we choose Big or Little Cottonwood Canyon Scenic Byway which are both twenty five miles east of Salt Lake City we would see the V-shaped canyons with impressive rock formations and at the mouth of the canyon we would come to the site where Mormon settlers quarried granite slabs to build their Salt Lake Temple. 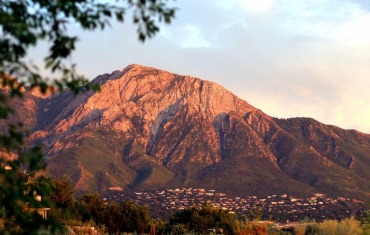 There are seven notable wilderness areas in this forest. In the Logan District there is Mount Naomi Wilderness where we could spot moose, elk, deer and beaver. In the same district is Wellsville Mountain Wilderness which has rugged but picturesque terrain and one of the narrowest and steepest ranges in the Rockies. We might also see moose and deer here as well as mountain lions and bighorn sheep.
In the Salt Lake District we’ll find the Mount Olympus Wilderness which holds Mount Raymond, Gobbler’s Knob and Mount Olympus itself (shown here). This wilderness area follows Big Cottonwood Creek. 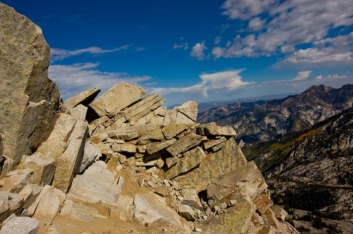 The two most interesting wilderness areas to me are in this district as well. They are the Lone Peak Wilderness and the Deseret Peak Wilderness. Lone Peak (at left) has several dramatic rock formations and colorful bands that stretch across the mountainsides. This wilderness area has several easy to follow trails so we would be able to take stunning pictures and enjoy the sights without the restriction of the car windows.
In Deseret Peak Wilderness we will be in part of the Great Basin ecosystem and the barren Skull Valley is to the west. Given the history, Skull Valley might not be the best place to bed down for the night. But we'll camp out somewhere in this vast series of forest before journeying on.