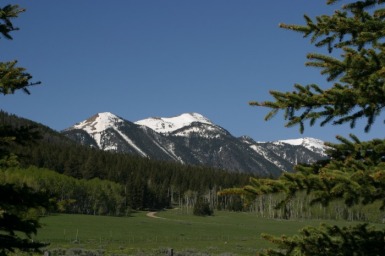 President Ulysses S. Grant established Yellowstone as America’s first national park in 1872 when he signed the Act of Dedication into law.
The area was first discovered by Europeans when John Colter of the Lewis and Clark Expedition broke from the group and happened across the uncharted land. He told tales of boiling mud and petrified trees upon his return, but his accounts were met with skepticism, largely regarded as myth and ignored. The first detailed exploration of Yellowstone was in 1869 by three privately funded explorers. Following their more credible account of the area, another exploration dispatched in 1870, the members of which spent a month collecting specimens and naming sites. 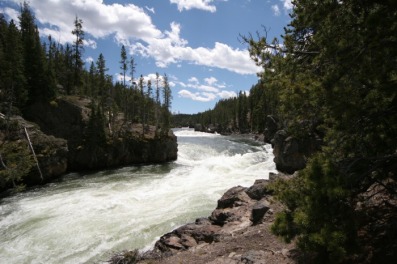 Jay Cooke wrote a letter to his friend William D. Kelley in Congress suggesting that the newly discovered area be set aside as a national park. Later paintings of the area by Thomas Moran helped convince the Congress that Yellowstone should be established as a national park, and F.V. Hayden’s Map of Yellowstone made clear the boundaries that had been discovered.
We will be out in this gorgeous wilderness for two days, and we have a lot to think about in terms of what to see and where to walk. Here are some of our options. 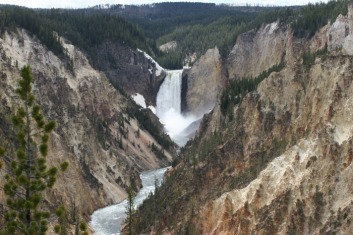 The Grand Canyon of the Yellowstone (at right) is the primary geologic feature in the Canyon District. 20 miles long from Upper Falls to the Tower Falls areas. This canyon was formed by erosion rather than glaciation.
Hayden Valley is an excellent place to see wildlife including grizzly bears, bison, elk and coyotes. 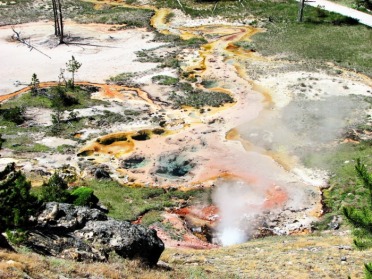 Artist Paint Pots (at right), a thermal area south of Norris Junction, features hot springs and two colorful mudpots for us to admire.
Gibbon Falls is an 84-foot waterfall that cascades down the remnants of the Yellowstone Caldera rim. Monument Geyser Basin is a nearly dormant basin with geyser cones as the leftover evidence of a more active period.
The Firehole River starts south of Old Faithful. It is famous among anglers for its pristine beauty and rainbow trout. Firehole Canyon Drive and Firehole Falls take travelers by 800-foot thick lava flows and a 40-foot waterfall. In the summer there is a popular swimming hole here. 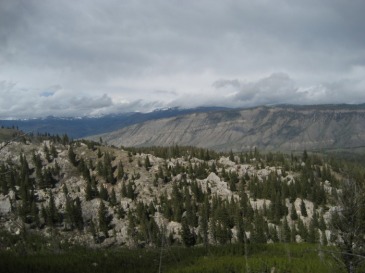 The Hot Springs are the main attraction of the Mammoth Area. The 45th Parallel Bridge and Boiling River runs roughly along the Montana-Wyoming border. We can bathe in the Boiling River with bathing suits, but without alcohol, to the dismay of a few of us.
One of Yellowstone’s best known “lost-in-the-wilderness” stories comes from the discovery of Mt. Everts (at left) by Truman Everts, who was part of the Washburn Expedition in 1870. The story was published in Scribner’s Monthly Magazine.
Bunsen Peak and the Bunsen burner were named after the same German physicist Robert Wilhelm Bunsen. He was involved in pioneering research about geysers. 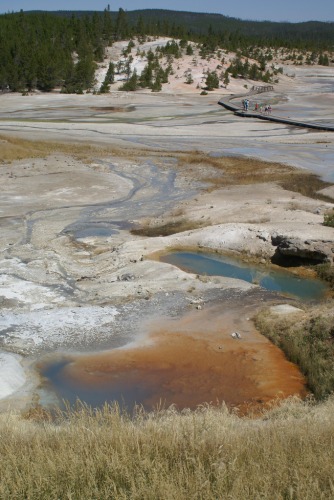 Norris Geyser Basin is the hottest, oldest, and most dynamic of Yellowstone’s thermal areas. Most of the water in the Norris area is acidic; Tom has voted not to tell Joey, but to let him discover on his own.
Porcelain Basin (at right), Back Basin, and One Hundred Springs Plain - Porcelain has no trees, Back is heavily wooded, One Hundred Springs is very acidic, hollow, and dangerous.
Roaring Mountain just north of Norris near Mammoth and is an acidic thermal area that contains steam vents. 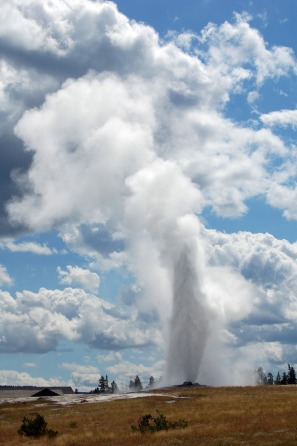 Upper Geyser Basin holds 150 hydrothermal wonders. The Castle, Grand, Daisy, Riverside and Old Faithful Geysers have eruption times predicted by the staff. Old Faithful is here at left.
Lower Geyser Basin is home to Great Fountain which erupts twice a day sending diamond droplets 100-200 feet in the air. Midway Geyser Basin holds Excelsior Geyser which reveals a gaping crater 200X300 feet with a constant discharge of 4,000 gallons of water into the Firehole River. Grand Prismatic Spring is the Yellowstone’s largest hot spring at 370 feet in diameter and 121 feet in depth.
Lone Star Geyser Basin erupts about every three hours. Shoshone Geyser Basin can be reached through a 17 mile hike crossing the Continental Divide at Grant’s Pass. It is a dangerous area though.
Seven miles south of Old Faithful on Grand Loop Road is the Continental Divide where Isa Lake drains into both the Atlantic and Pacific Oceans at the same time every spring. 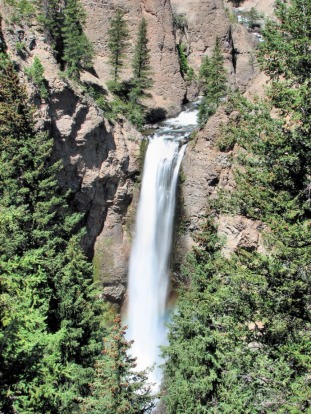 Petrified Tree is located near the Lost Lake trailhead is an example of ancient redwood similar to those found on Specimen Ridge. Specimen Ridge is located on the Northeast Entrance Road of Tower Junction. It holds the largest concentration of petrified trees anywhere in the world, as well as petrified leaf impressions, conifer needles, and microscopic pollen from species extinct from the park.
The most recognizable feature in the area is the Tower Fall which has a 132-foot drop that is framed by eroded volcanic pinnacles. A painting of this waterfall by Thomas Moran helped in the establishment of the Yellowstone National Park in 1872.