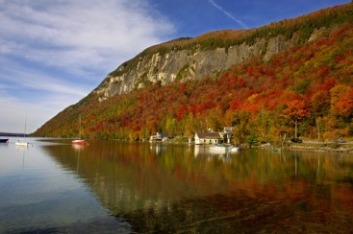 After we leave Maine, we take our first step westward, to the "west coast of New England" in Burlington, Vt. This is no sprawling metropolis by any means; in fact, Vermont itself is so small a state that it has only one congressperson in the House of Representatives. To compare, California is our largest state, and has 53. So Vermont is as sparsely populated as could be, and that's something to look forward to, if you ask me. Less people means less crap, and more of what was here before we humans started taking over the world - such as beautiful Lake Willoughby, pictured here. 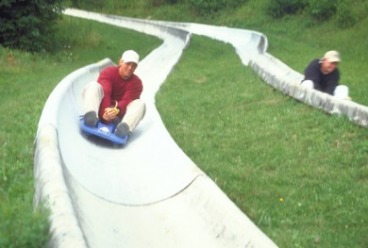 It's been a long, long time since I've been up this way. I had an aunt, Aunt Dinny, who lived up this way until her unfortunate passing when I was about 11 years old. She and our Uncle Leo lived in a very large house, surrounded by fantastic scenery and with a satellite dish in the back that was big enough to fry a whale. I have some pleasant memories from these visits, pleasant but hazy - memories like playing Stratego, getting pranked by my sister and a houseguest that Aunt Dinny had for some reason, and... the Alpine Slide.
This was the most awesome invention I'd ever encountered when I was that young. This was like skiing on your ass, sliding down a mountain on a concrete path atop a plastic and metal slidey contraption. I will stop at nothing to satisfy my youthful craving to once again ride these fantastic vehicles.
But in my research I've discovered Burlington to be one highly recommended destination, thanks to its beautiful scenery and generally laid-back state of mind. Weather permitting, I'd like to see us venture into the woods a smidgen here. Beyond that, you might find us occupying space in any or all of these fine local sites below. 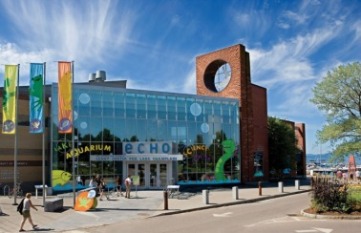 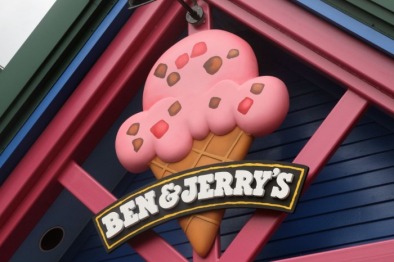 -Flynn Center for the Performing Arts