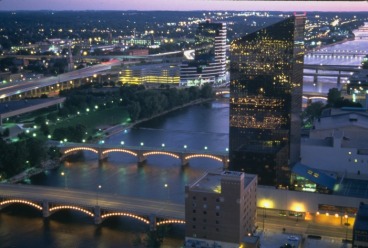 Michigan appeared on our horizon as a quandary, a conundrum. In May of 2008, we began planning this venture around a month-long schedule with about 25 different stops, most of which were big-name metropolitan areas - a qualification which, in Michigan, would really only bring us to Detroit. No offense, but no thanks.
Yet, as our itinerary grew by leaps and bounds, it became clear that some semblance of a visit to Michigan would be necessary for our trip to reach its fullest potential. And after some cultural and geographical research, it's clear that Grand Rapids is the place to be. 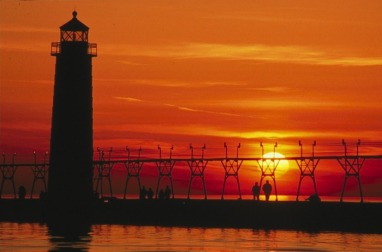 As we barrel toward the city, we're coming from Indianapolis with a five-hour drive through Fort Wayne, Ind. and Kalamazoo, Mich. (if only for a photo beneath a "Welcome to Kalamazoo" sign). Thinking of Michigan as an upheld right hand, Grand Rapids is around the lower-left section of the palm, just a skip and a jump from Lake Michigan. It's the second-largest city in the state, with a handful of exceptional museums, some delicious craft breweries and a half-hour drive from the coast of Lake Michigan, referred to as the Gold Coast. I understand that a sunset on the Gold Coast is nothing short of breathtaking, which is a tidbit that we might have to make use of in our time here.
We've got a day to frolic about in town, and some spectacular advice from the good people at the Grand Rapids/Kent County Convention & Visitors Bureau, who were eager to help me set our itinerary straight. That in mind, let's look at what we're going to squeeze into our visit. 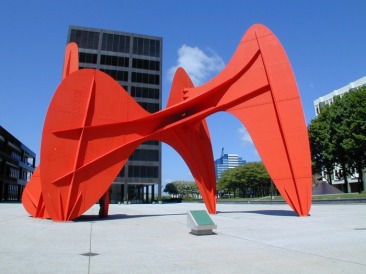 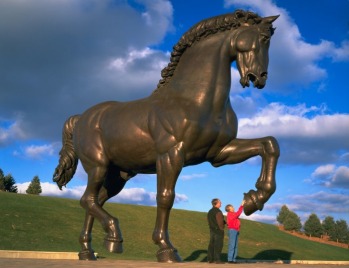