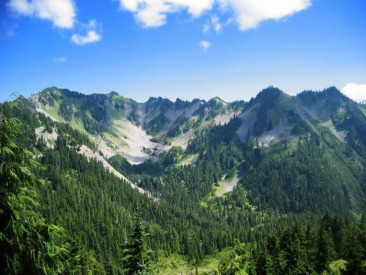 We will have a lot to explore when we arrive in Olympic National Park because there are three distinct ecosystems here - the Glaciated Mountains, the Temperate Rainforest, and the Coastal Strip. There are also many unique plant and animal species here because the park is a peninsula with a high mountain range dividing it from the land to the south. The Olympic marmot, for instance, is a unique species that is only found here. Hopefully we will see one of these creatures, as I am quite sure it will be the first marmot I will have ever seen.
The Glaciated Mountains will provide a beautiful backdrop during our time here. The Olympic Mountains stand at the center of the park, snow-capped with massive, ancient glaciers. This, of course, will be a stark contrast to our eventual travels through the Temperate Rainforest. 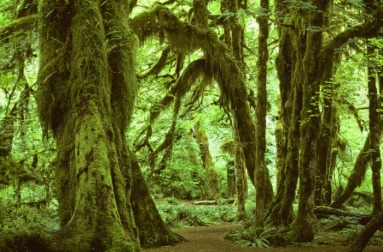 The rainforest includes Hoh Rainforest and Quinault Rainforest. There are four rainforest valleys in the park: Bogachiel, Hoh, Queets, and Quinault. The Hoh Valley (at right) is the primary place to see the rainforest. The old growth forests of the Pacific Northwest produce three times the biomass of tropical rainforests, and because it is temperate here, the forest is dominated by dense coniferous timber. 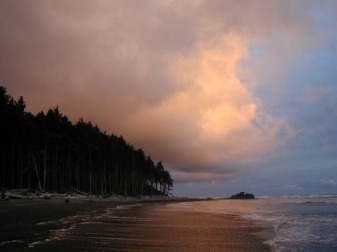 We will be able to hike along the Coastal Strip. This area of the park can be divided into three different segments: twenty miles of shore line from Rialto Beach to Cape Alava, seventeen miles of the coastline from Third Beach to the Hoh River, and finally the stretch of shore from Ruby Beach (shown here) to South Beach. The Quileute Indian Reservation is located on the fist segment of the Coastal Strip, which, if possible, would be very interesting for us to visit. The most popular part of the Coastal Strip is the Ozette Loop, which partly meanders through the primal costal cedar swamp. Driftwood covers the beaches due to the proximity of the beach to the forest edge; some beaches are covered with sand, some with large rocks. And because of the proximity to the forest, the misty weather makes travel slippery at times.
Ninety-five percent of this park is designated as wilderness, which gives it more protection than if it were designated as a national forest or park. If we decide to camp here we will have to be aware of certain rules regarding food storage, camp fires, and what is and is not allowed in regards to the use of driftwood.
Here are some places we might want to do some hiking. 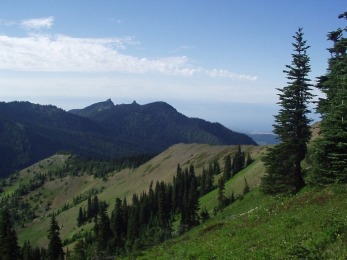 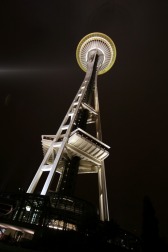